On September 21st , to celebrate the United Nations International Day of Peace and commemorate the 50th anniversary of the Convention for the Protection of the World Cultural and Natural Heritage; to expand international exchanges on the road to peace and connect people with each other, the ninth "Peace Garden Peace Festival " and the "Awarding Ceremony of the Global Youth Photography Competition", sponsored by the China World Peace Foundation, the Beijing International Peace Culture  Foundation, the Beijing People's Association for Friendship with Foreign Countries, and the Beijing Returned Overseas Chinese Federation,  supported by  UNESCO,international organizations and governments, were grandly held in Beijing. The theme is "Shared heritage,Shared value ,Shared sustainable development of future". Politicians, leaders of international organizations,diplomatic envoys to China, government officials, leaders of democratic parties, celebrities from all walks of life and youth representatives from 160 countries attended the event online and offline.

On September 21st , the ninth "Peace Garden Peace Festival" was held in Beijing Peace Garden Museum. The picture above shows the venue.

After the peace dove was released, President Li Ruohong,on behalf of the sponsors,  read out a congratulatory letter from H.E.Ms. Audrey Azouley, Director General of UNESCO. The letter said that UNESCO remains committed to the peace cause, undertaking, for example, education initiatives such as: its anti-racism master classes for young people; its media and information literacy work, which is designed to cultivate critical thinking skills in order to

counter hate speech; and its International Coalition of Inclusive and Sustainable Cities, which brings together more than 500 municipalities committed to equality around the world. 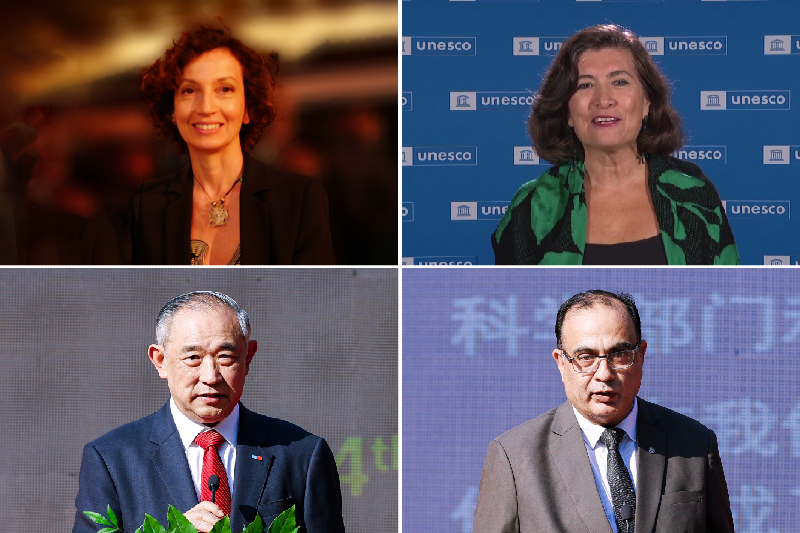 On September 21st , the ninth "Peace Garden Peace Festival" was held in Beijing Peace Garden Museum. The above picture are H.E.Prof.Shahbaz Khan from UNESCO Representative Office in China, and Dr. Li Ruohong, President of the China World Peace Foundation.

H.E. Ms. Gabriela Ramos, Assistant Director General of UNESCO, said in a video speech that she congratulated the Beijing International Peace Culture  Foundation on becoming an official partner of UNESCO and thanked President Li Ruohong for his generous and continuous support for the Silk Road project. She said that the common heritage and values of mankind should be remembered. We should seek to encourage dialogue , create knowledge and build a more inclusive and peaceful societies. Identity sits at the heart of many conflicts. We need to re prioritize investment in the social drivers of peace. The establishment of a social equity laboratory and a sustainable scientific "bridge" alliance are also the common heritage of the promotion of the Silk Road and the dialogue and peaceful exchanges between different cultures. Since 2016, the Beijing International Culture of Peace Foundation has been a major partner in the implementation of the Silk Road programme. we are very proud of our joint efforts in cooperation. She also introduced the collection and awarding of the fourth edition of "Silk Road in My Eyes" photo contest and invited everyone to visit the Global Photography Competition.

Former Prime Minister H.E.Dr.Sharaf of Egypt delivered a video speech with the theme of "Civilized Development Towards Common Peace and Development". He expressed the thought ,action, harvest of things with Aristotle's "philosophy" concept. He talked about how to cope with challenges in the world crisis with more than 200 countries and regions. International relations are defined as cross-cultural relations. Make good use of the United Nations partnership for sustainable development and support the " Belt&Road" cooperation platform and the "peace and security" initiative. There will be no development without peace.

H.E.Senator Mushahid Hussain, Chairman of the Foreign Affairs Committee of Pakistan's Parliament, said in his video speech: The Silk Road is a common heritage. The five principles of peaceful coexistence are shared values. The future of Asia cannot be the hostage of the zero sum game. Congratulations on the successful convening of the 20th CPC National Congress, and long live the cause of peace, harmony and cooperation.

The former Dutch Minister of Education, Science and Culture, H.E.Ms. Annette Nijs, President of Global Executive Board of BSN said in her video speech: Great leaders want to create benefits for society and the whole world. We live in a world where the West, East and other ideologies provide ample space, and the diversity of countries is serious. Confucius said, "There is only one family under heaven.".She congratulates China on its global development initiative and hope to participate in the grand event of the 10th "Peace Garden Peace Festival " in 2023.

The celebration activities were carried out in their respective proposals and plans for jointly protecting heritage, creating value and sharing the future, and discussed ways and means of deconstructing and promoting mutual understanding, solidarity and cooperation. The wonderful speech won warm applause. 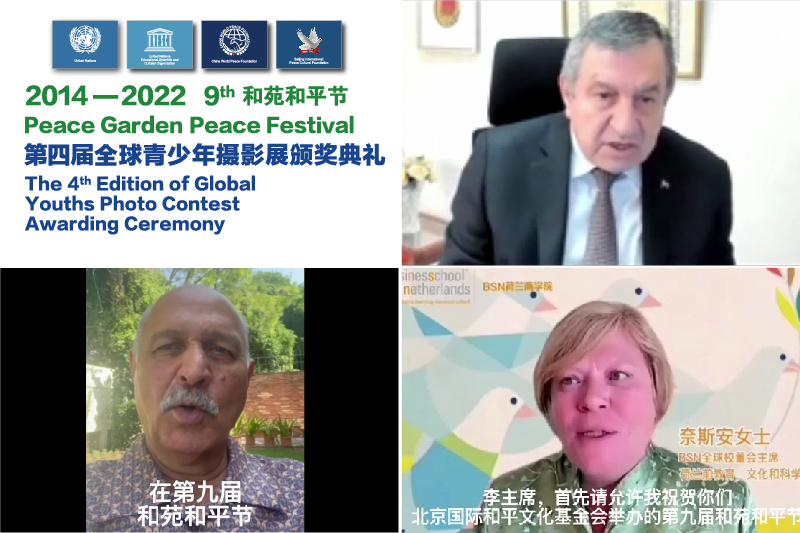 On September 21st , the ninth "Peace Garden Peace Festival" was held in Beijing Peace Garden Museum. The above picture shows the video message delivered by H.E.Ms Gabriela Ramos, Assistant Director General of UNESCO, H.E.Dr.Issam Sharaf, former Prime Minister of Egypt,H.E.Senator Mushahid, Chairman of the Foreign Affairs Committee of the Senate of Pakistan, and The former Dutch Minister of Education, Science and Culture, H.E.Ms. Annette Nijs, President of Global Executive Board of BSN.

H.E.Prof.Shahbaz Khan from UNESCO Representative Office in China read out a letter from UNESCO Director General H.E.Ms.Azouley to President Li Ruohong on the spot, congratulated Beijing International  Peace Culture Foundation as the official partner of UNESCO, and proposed the cooperation plan and vision for the next six years.

Mr.Dai Jianjun, Vice President of the Beijing NGO Network for International Exchanges , said that the "Peace Garden Peace Festival", which has been held for nine years, has played a positive and important role in promoting multicultural exchanges and mutual learning and enhancing understanding and mutual trust among people of all countries as the practice of the UN's sustainable development agenda among Chinese people. The era of peace has not come easily, and each of us should strive for it. We look forward to sharing the fruits of development in multilateral solidarity, trust and cooperation. Let's hold high the banner of peace and cooperation, carry out extensive people to people exchanges and cooperation, and work together for a better future of building a community with a shared future for mankind and a peaceful world.

In his speech, Azerbaijani Ambassador to China H.E. Mr. Zeynalli Akram said that The Government of Azerbaijan has promoted this approach by creating an environment that supports and promotes the ancient traditions of tolerance, and rejects radicalism, extremism and hatred. the “Baku Process” put forward by the President of the Republic of Azerbaijan Ilham Aliyev in 2008 can be considered as one of Azerbaijan’s important contributions to the intercultural dialogue as a basis for peace and sustainable development. A peace agreement between  Azerbaijan and Armenia  can be signed by the end of this year, which will open a new era of peace, cooperation and development in the South Caucasus region.

In his speech, the Maldivian Ambassador to China H.E. Ms.Aishath Azeema said: I sincerely thank Dr. Li Ruohong for his important initiative to bring us the ideas and cultures of people from all over the world. This activity is indeed an important pillar to strengthen the friendship between the Chinese people and the people of other countries. Cultural heritage is a kind of sustainable resource that has not been fully recognized. We must make full use of cultural heritage to achieve the goal of sustainable development. This year is also the 50th anniversary of the establishment of diplomatic relations between Maldives and China. The relationship between Maldives and China is based on common historical ties, sovereign equality and mutual respect. The relationship between the two countries will continue to strengthen.

Sri Lanka Ambassador to China H.E.Dr. Palitha Kohona said: It is particularly significant that the youth photo competition is being used to widen our eyes on the world and to embrace the message of peace. I hope that, one day, some of you at least will occupy the world stage of photography.Beijing has tremendous opportunities for a photographer.  From the beautiful imposing ancient buildings of sublime beauty, to mind blowing modern creations that take your breath away, from the lush flower decked curbs to the green forests nearby, now taking on the mantle of fall colours, from the millions of people busying themselves with their daily chores, to children playing at playgrounds without a care in the world.  This is indeed a photographer paradise.  Discussion must be relied upon rather than brute strength and weapons to resolve conflicts. So let us all strive for peace, be respectful of the needs of each other and work towards a future where human beings are valued more than material rewards.

He Wei, associate professor of the Academy of Fine Arts of Minzu University of China, also made an in-depth explanation and elaboration on the application of the central axis for World Heritage. 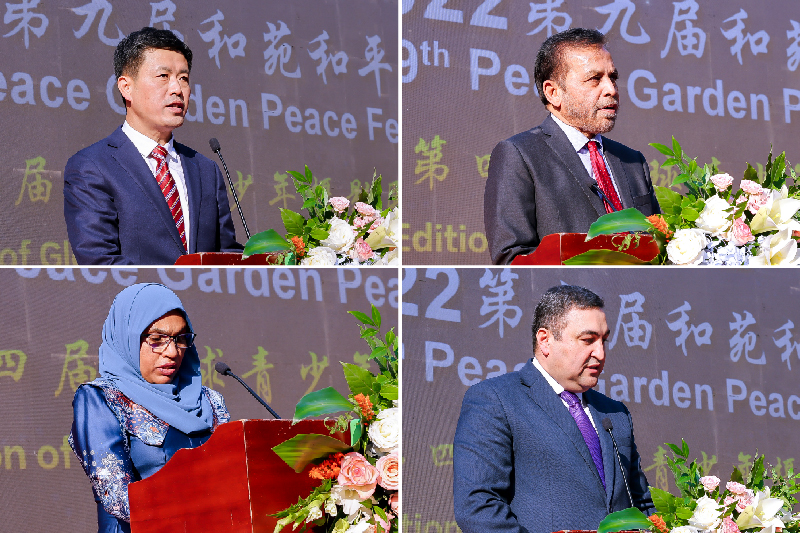 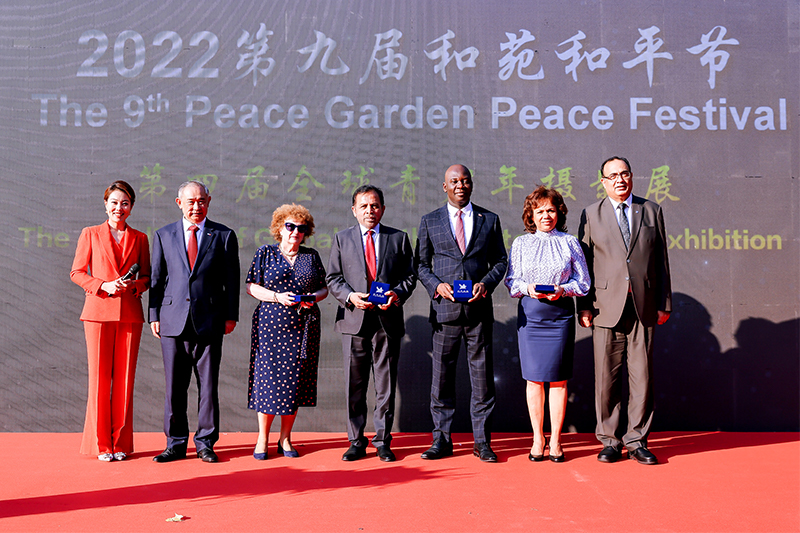 At the event, President Li Ruohong, together with the representatives of the event organizers, awarded the honorary medal of "Ambassador for Peace"to the new ambassadors of various countries to China who have made contributions to the cause of peace .

This year's Peace Garden Peace Festival also unveiled the winners works of the fourth "Heritage of the Silk Road in the Eyes of Teenagers" international photography competition. Among the 5000 primary works from the global participants, the international jury composed of six well-known professional photographers selected three winners and two honorary awards in the age groups of 14-17 and 18-25 respectively. The jury will select 60 works for a global tour at an appropriate time, and the exhibition in China will be held in Beijing Peace Garden Museum from September 21st . At the same time, the "International Youth Painting Exhibition for the Winter Olympics" was also displayed. 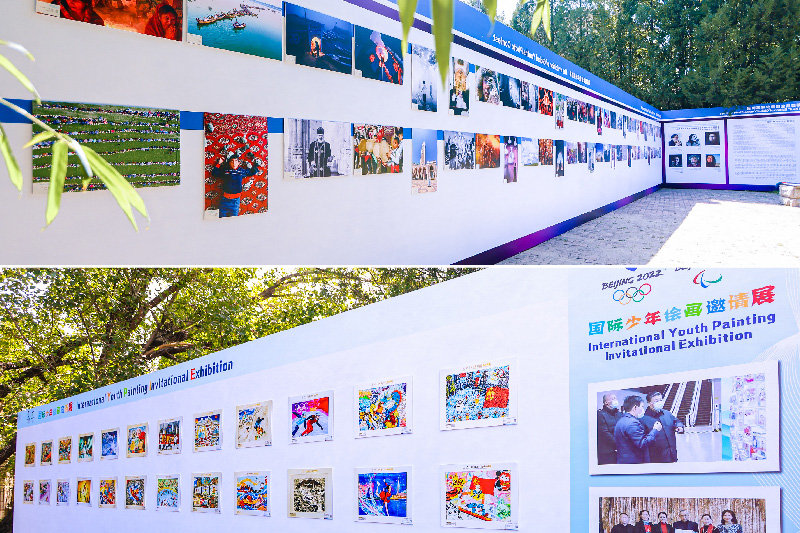 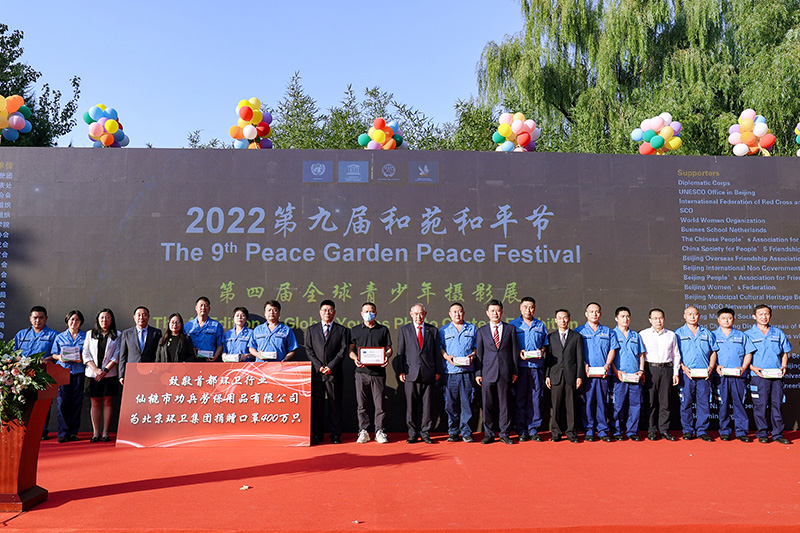 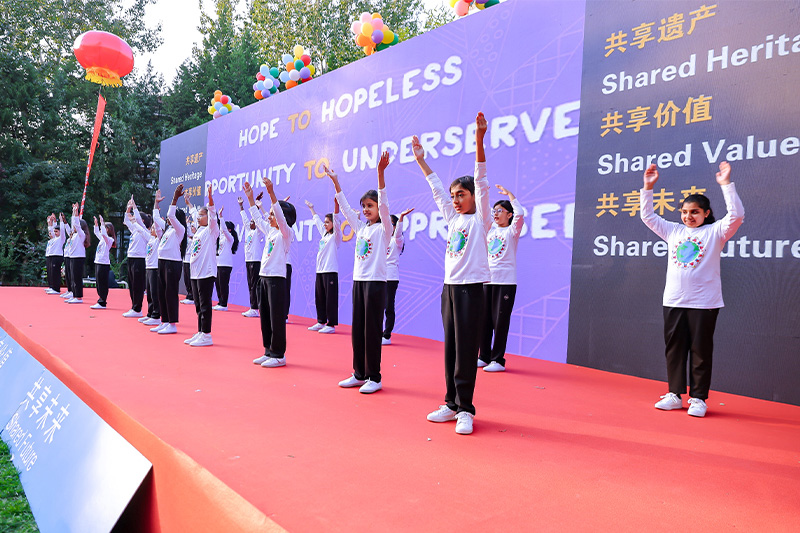 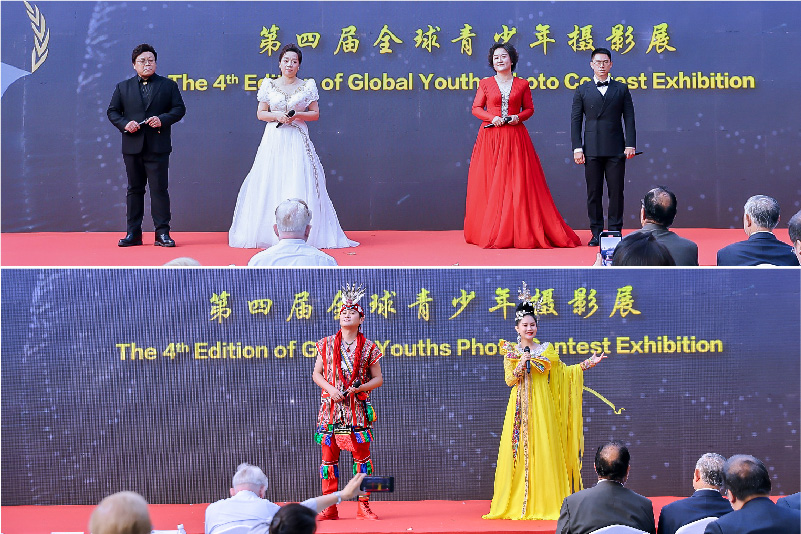